If joy was given feet, this is what you’d get: 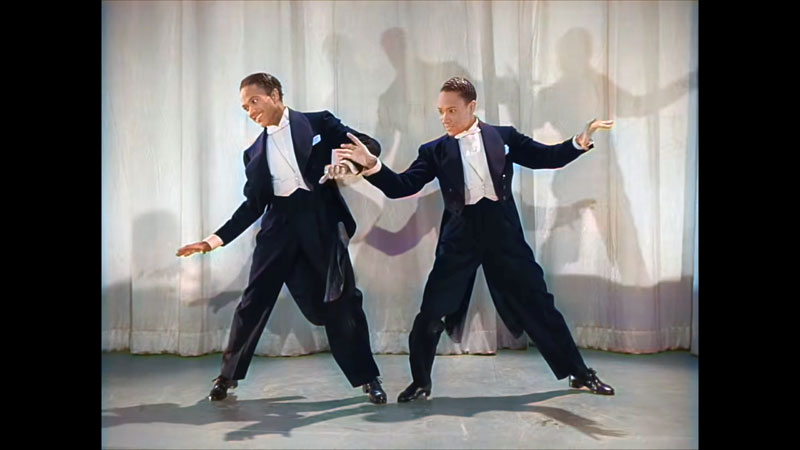 I discovered them sometime last year when someone on Facebook posted a YouTube link to their closing dance number from the 1943 movie Stormy Weather.

If I had the greatest orator skills on the planet, I could not describe these two … you just have to see them for yourself on the Black Pepper Swing YouTube channel.

My initial gut reaction was, I really want to draw like those boys dance!

I grew up during the era of musicals and ridiculously lavish dance numbers. People like Gene Kelly, Fred Astaire and Ginger Rogers and many others. Great dancers, for sure. But I never saw in them what I see in Harold and Fayard.

So laid up in bed with covid in December was a great opportunity to binge watch everything Nicholas Brothers: movies, interviews and documentaries – hey, you can only sleep so much for 10-12 days straight – and I finally got to see the entire Stormy Weather movie. Technology has its upsides!

After the dancing, the most fun thing was watching documentaries and tributes from fellow dancers. People like Gregory Hines who said that when he and his kid brother took up tap dancing, people would tell them, Hey! You two will be the next Nicholas Brothers! Mr. Hines said, at the tender age of seven, he didn’t know who they were talking about. Later, when he finally got to see Harold and Fayard perform, he knew for certain, NOPE! We’re NOT going to be the next Nicholas Brothers!

It’s a wise creative who knows how to realistically size up their own capabilities and who also is able to appreciate the abilities and accomplishments of other creatives.

Many in our modern era want to test the waters to see if it’s going to be worth their while to put in all the hard work. Many of them have real talent. So they’ll display a sampling of their wares on social media and the internet. If they don’t get immediate feedback in the form of accolades, comments, likes, and thousands of views, they’ll quit. They’re not doing it because they love what they do, they’re just after the validation and acclaim. And that’s backwards. The right way is to love what you do so much that you just get busy doing it, learning it and growing in it. The validation comes later. True validation doesn’t come from the outside, it comes from the inside. That’s the secret that births joy.

Harold and Fayard knew that secret. They didn’t dance for the validation or accolades, they simply did the thing their Creator designed them to do … they danced for the sheer joy of it! They loved to dance! They had to dance! And it showed!

I suppose this is what many creatives refer to as “flow”. When you’re so into the thing that you do, so surrendered to it, that it and you become one, and the result is pure joy! Joy that’s palpable … joy you can feel down in your bones … joy that will shine through your work and will touch your viewer/audience/reader down in their bones, too! The joy and inspiration that is contagious!

And even as you’re watching them, you know that all that seemingly effortless magic is not magic at all. It’s the result of hours and years of planning, practicing, learning, failing, trying again, more mistakes, more practice, a little success right when you’re ready to quit, getting that renewed energy to get up and go at it some more … there’s pain, tears, hard work and much sacrifice behind all that “effortless magic”. Those are the ingredients of pure joy.

Harold and Fayard hinted at the sacrifices they had made in one of the tribute shows honoring them in the early 90’s. Harold was approaching 70. Fayard was 7 years older than his brother and had been through 2 hip replacements by that time ... not surprising after years of those signature leaps that ended in splits. They were onstage, musing aloud about what they would be doing that night for their audience.

Harold had a good idea … “Do a split!” he told his brother.

Fayard replied, “NO! I don’t want to do that anymore!”

I’ve got some new, inspiring heroes. After my lousy December, dealing with the covid monster, I’ve felt so fresh with renewed energy, eager to get back into the swing of things. Ready to put my shoulder to the plow and do all the hard work I need to do to get some of that wonderful joy back into my own life. There may be some sacrifices and tears ahead, but nothing, I’m sure, that God won’t help me get through if I won’t give up on me and Him!

I want to draw and write like Harold and Fayard danced!