My studio is a bedroom that has a nice walk-in closet where I store my art supplies and projects, either finished or waiting to be worked on. Like all closets over time it gets to looking disheveled and neglected. So one evening in January, I decided to bring some order back to the chaos. In the process I stumbled across a forgotten treasure from long ago. I call it my wondrous disaster.

It was wondrous, because it was one of the most fun and fulfilling projects I've ever worked on. It was disastrous, because I cannot believe I actually had the nerve to go through with it.

And I'm not talking about the kind of brave nerve that says, Wow! I finally mustered up some courage!

This was more of the brash, presumptuous kind of nerve that leaves you saying, I can't believe I did that! I'm going to go crawl under a rock and hide my face forever!

Last week I told you how I discovered the Prismacolors and got started doing colored pencil portraits. My little way of telling a "story" of someone's life in a single drawing. I really thought that would be as close to illustration as I'd ever get.

Years before one of the teens at church had talked me into reading The Hitchhiker's Guide to the Galaxy by Douglas Adams. I don't know what to say about that book ... British humor ... like slapstick and Charlie Chaplin, you'll either love it or hate it ... I loved it!

I've always been a reader, but mostly non-fiction. I have a favorite Christian author who's very well-known, and for obvious reasons you will understand in a few minutes, he will remain nameless.

Remember how I keep stressing that everything you experience and observe is having an effect on you? Well, while reading this favorite author one day, I ran across a passage where he was explaining about the relationship between truth and grace. To illustrate his point, he made up a little tale about an alien who comes to earth and observes that earthlings have, not one, but two gods. One of those gods is terrible and mean ... he has rules you have to follow and when you break those rules you will be punished severely ... his name is Truth. Then the second god is sweet and understanding ... this one knows you're having a hard time and can't keep all those nasty rules .... it's okay! ... you're forgiven! ... no problem! ... this god's name is Grace. Of coure either extreme is bad. No one can live under all hard Truth. And society couldn't survive under all lenient Grace without some structure. So that's where Christ comes in, the perfect balance of Truth and Grace in one Savior.

That's so beautiful! That's so deep! The entire gospel summed up in a brief little story! I liked it! And I should have just let it go at that. But, darn it! He just had to mention the alien thing, didn't he!? Aaaargh!! Like I've told you before, there's two of me inside ... the Sanguine and the Melancholic. And of course you know that, as a creative, I have a pony inside as well ...

The Melancholic had to sit and ponder it. The more we pondered, the more deep and profound it got ... how could Truth and Grace finally merge together into one Being? ... The Sanguine, remembering the pictures the Hitchhiker's book had conjured up, kept seeing pictures of the little alien ... what was his life and planet like? What would the gods, Truth and Grace look like? The pony said, Get the pencils! Grab the keyboard! We're going on a ride! And off we went!

The Title: The Fight That Rocked Zanook
The Synopsis: The people of Zanook are so civilized and technologically advanced that life has become boring. They put together a committee to come up with a solution. They decide that what they need is a god to worship, so they put out an advertisement asking any gods nearby to come and apply for the job. Two gods show up to fill the position, Truth and Grace. Truth is a mean bully and nobody likes him, everybody is afraid of him. He builds a huge and garish temple in the middle of town with hard pews. Grace is nice and everybody loves her. Her little country church is warm and inviting with padded pews, a pot belly stove and an old timey piano. But there's not room for two gods on Zanook ... somebody has got to go. So Grace and Truth get into a huge fight. They end up on Zanook's moon and have such a big fight that they cause an explosion that's so huge that half of the moon is blown away. The explosion is so big and so bright that it can be seen across the galaxy ... and it turns out to be the "star" the shepherds saw the night that Christ was born on earth. The End. 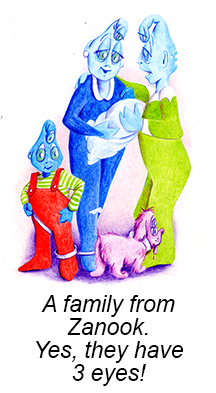 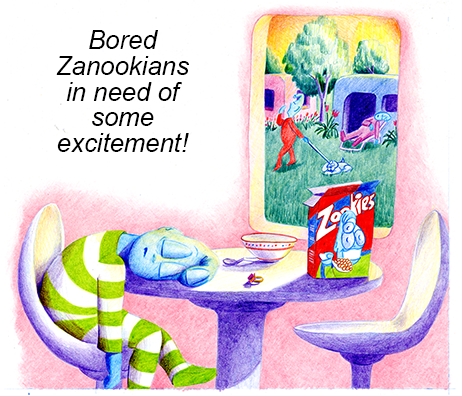 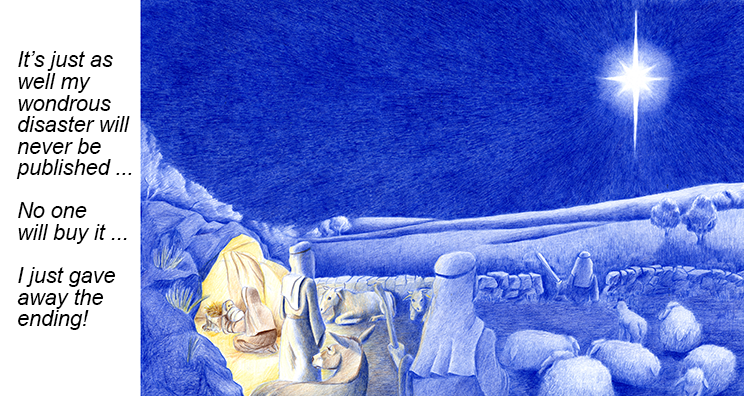 Now what I just described for you in a brief paragraph above ... took over fifty pages to tell in this book I put together! I talked on and on about the Zanookians' daily life, their sports and entertainment. There were other gods from the other planets who applied for the job before Truth showed up. And one character who got condemned by Truth, pardoned by Grace, and in the closing pages, found resolution with both. I'm not doing a good job explaining ... you would just have to read it ... if you can tolerate an amateur trying to write like Douglas Adams!

When I got done with it, I packaged it all up and shipped it off to this author and his publisher. And was actually miffed when they turned it down! Didn't they recognize brilliance when they saw it?!

That was the disastrous part of this project. Now, let me tell you about the wondrous part...

Finding this treasure in that closet was a real treat for me. The quality of the writing and the book itself wasn't much to get excited about ... barely a step or two above student work. But I really did enjoy looking at those long-forgotten illustrations! And remembering the hard work and the joy that went into them. Not just something to look at, but something to remind me of my calling and this wonderful journey I was on.

Despite how I felt back then, today I realize that it was a very good thing that author and publisher turned me down. I felt like a failure when that happened, but really it was just the next learning step in my journey. I do it sometimes ... I bet you do it, too ... beat ourselves up ... thinking about how we should've done it sooner, better, faster. But God has a plan ... or does He really?

When I used to do drawings and paintings, always I would sign and date them. For the books I've done, I can look inside and see the publishing date to know when I worked on them. But for a stack of forgotten illustrations found in a closet, I really had no idea how long ago I did them. I only found the manuscript and the original illustrations ... couldn't find the computer files. I discovered the stack of illustrations in January. They were so neat, I thought that it would be a good and encouraging blog subject for other struggling authors and artists to share my experience with getting my work rejected. We all go through the process!

These blogs were written in February, and turned over to my web people in the middle of the month to be posted on the website in March. A few days before I turned the files in, I found it! The dummy book I had assembled long ago of The Fight That Rocked Zanook. Still no computer files, but here was a color, coil-bound dummy of the book all laid out with type and illustrations! It was so much fun flipping through it ... and a big surprise ... I found a date!

On the very last page, I have a "From the Author" statement, and at the bottom is my name with the date, March 2002!

So it was exactly eighteen years ago – to the month – that I finished my wondrous disaster!

Is it really a coincidence that in March 2020 I'll have a blog up about my wondrous disaster from March 2002? Is that some kind of milestone? An anniversary? God just giving me a wink? Just affirming He's still got His hand on me?

And found inspiration for subject matter for a blog ...
That I've been writing since last spring when my web people said, You need a weekly blog. ...
Which I frankly didn't want to do – and actually told them, No! at first ...
But figured I should comply, since God Himself told me to hire them ...
Because in September 2018 He was the one who decided I needed a website ...
And made a way for that to happen ...

And I thought it was just a nice distraction He gave me to soothe my pain over losing my sweet dog, Chloe, who passed away that year.

There's really no such thing as a coincidence. He's got a plan all laid out.

And every once in a while, He gives me a little nudge and says, Hey! Turn around and look at where we've been!

And I do. And amazed and encouraged, I have a little cry. I am so loved.

From the day I was sitting in my Mom's kitchen, showing her a story I wrote ... all the reading I did over the years about the publishing process ... all the forgotten projects I've worked on gathering dust in some forgotten box ... working in print shops ... pasting up galleys of type with X-acto knives and waxers ... years later learning all the new technology and moving over to computers and digital printing ... enjoying what I was doing, and yet always a little frustrated because I really just wanted to draw ... and finally, years and years later, getting to do it!