A little more RESPECT, please,
for the lowly STICK FIGURE ...
The Meek and the Mighty 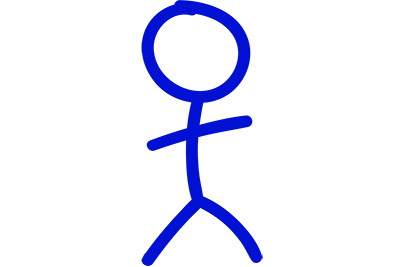 Most any five year old could draw the same thing, so we barely give it a second glance. Unless it was our five year old who drew it, and then it will be proudly displayed on the refrigerator door! 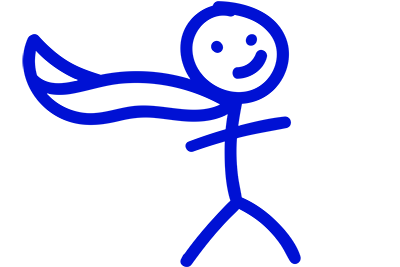 It's important, because we are creators, too. Every time we sit down to write and draw our picture books, we, too, are creating brand new lives and worlds and stories. Our little creations can hardly compare to THE Creation and it's Creator. We're more like little children copying the activities of our beloved Daddy. We'll never be at His level when wielding our craft, but He designed and equipped us to do the very thing we're doing and I'm pretty darn sure we bring Him great pleasure when we're about the tasks He's assigned to us ... like any loving Daddy would be.

In order to imitate somebody's work, you need to study it and them closely and see how they do it. After He had created an environment suitable for them to thrive and live out their lives/stories, God created His crowning creation, human beings, and breathed life into them ... He animated them.

That's exactly what we do when we illustrate stories for picture books ... we create a suitable world/setting/environment and populate it with the characters. Then we animate them.

Of course, we're not God and we can't turn our characters into real flesh-and-blood-with-souls people ... but, animate them? Oh, YES, WE CAN!

Just like a writer can carefully select and arrange words to create pictures and evoke emotions in readers' minds and hearts, an illustrator can build energy into the art that can make it pop off the page and "come to life". And don't wait until you add color to do it, build life and energy into your figures with the very first pencil stroke.

The secret begins with knowing how real bodies move. And movement is dependent on structure, i.e. the skeleton. 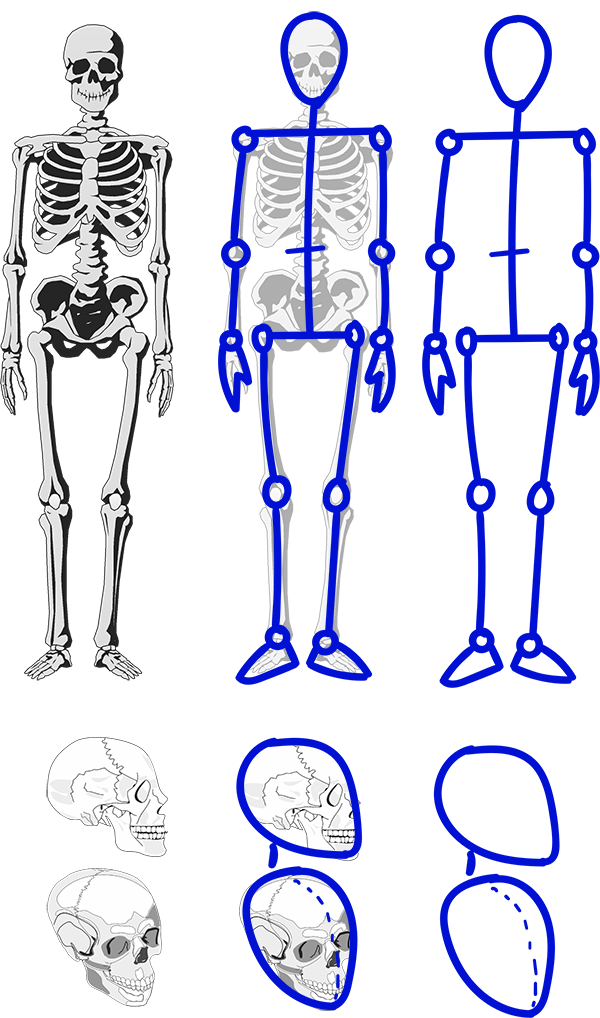 A stick figure is basically an abbreviated skeleton! Just a few more lines and some added details, but not a whole lot different from the stick figures you were drawing at age five:

1. Add some horizontal lines to indicate shoulder and hip widths.
2. Small circles indicate bendable joints: shoulders, elbows, wrists, hips, knees, ankles.
3. All lines should be straight, except the body and neck line. Those indicate the spine which can bend and flex. A small mark indicating the waist will help you visualize where the body can bend.

We'll work on proportions in the next article. For now, keep arms, legs and torso about equal top and bottom. The elbow show be about even with the waist.

Now it's just a matter of posing our stick figure in any position we like ... here are 5 basic positions:

They're okay, but just okay. We can make them better by making just a few tweaks ...

The tweaks I made below are subtle. Compare them to the originals above. The idea is to make them look like they are about to move or are in mid-movement ... we don't want them to look static. They can be a little extreme like in the runner at the bottom, as long as he is balanced and not about to fall on his face!

It's better, in fact, to make them a bit exaggerated and extreme if that will help to create movement. Knowing how far you can go will come with practice.

These little stick figures are the first step to take when laying out pages with characters. They are simple and quick and easily adjusted. They capture enough energy and emotion so you can see how they'll work sequentially with each other and with accompanying text.

Because they are simply "abbreviated skeletons", you don't have to worry about whether your characters are extremely fat or skinny ... skeletons stay the same! When everything is in position, you'll use these stick figures as frames on which to build the bodies.

See what mighty things those meek little stick figures can do for you!

But those characters will be different heights, and they will be male and female, young and old. Come back in February and and we'll see how to proportion them so we can begin to tell who's who.