From Brain to Paper
The Process of Creativity

All those great ideas in your head ... what's the process to getting them onto paper? Let's explore that ...

First you need that lightning bolt of inspiration ... where in the world does it come from? Reading an online article. In a conversation with a friend. A stirring book or movie. A sunset. A sermon. Stray thoughts popping up in the shower. Puppies and kittens.

Something that stirs your soul. Or ruffles your feathers. Or tickles your funny bone. And has such an effect on you, until you just gotta' do something about it ... like draw pictures or write words!

And sometimes you can pull from several sources to get the inspiration you want ...

This is a very important skill for illustrators to develop, because you don't just draw a kid in his room ... there's all kind of stuff going on in there! He'll have games and toys on shelves. Posters of heros and events on his wall. A desk with lots of crayons, markers and drawing paper, books and magazines, and homework. Clothes on a unmade bed, socks and toys on the floor, and probably a messy closet with the door standing ajar. (Tidy kids make for happy parents, but are dull picture book subjects!) Looking around his room will tell you a lot about him, so the illustrations need to reflect that.

And the real trick is to have all this busyness happening while not losing your focal point. When the viewer sees the picture, their eye should immediately be drawn to the main point, and then afterwards their eye will travel around to see the rest of the scene. Mr. Terry's video discusses this.

One day while trying to fill up a drawing with lots of detail like this, I got to laughing to myself – (don't say anything, I know you laugh and talk to yourself, too!) – laughing about having so much stuff and I was remembering a favortite quip from comedian, Steven Wright:

You can't have everything. Where would you put it?

That made me think of a funny story a man told me once about how he trained his border collie to retrieve the newspaper from the end of the driveway. One day he came home to find that the dog had been up and down the street and piled up everyone's newspapers at his back door! Oops!

So now I'm really having a good laugh and I'm getting pictures in my head of a dog going up and down a neighborhood street stealing stuff. Did you ever wonder what an artist does all day ... holed up all alone in that studio ... now you know!

Besides a newspaper, what else could a dog steal? How about ...

a softball
a bat
a watering can
a tool box
a muddy work boot
a frisbee
a flower pot
a tennis racket
a flamingo yard ornament
a bucket
a pool float
a pool noodle
a football
an Amazon package, maybe 2!
a hula hoop
some garden gloves
a toy fire truck
a lawn chair
a garden hose
a cooler
a thermos
a weed eater
a pizza delivery
a baseball cap
a gas can
a shovel
a chain saw
a baby doll
a can of car wax

30 items if you include both Amazon boxes! Let's pile it all up ...

Drawing A Pile of Stuff

Draw out some boundaries – how tall and wide do you want that pile to be?

Get the list of items out and start stacking them up! Exaggerate, but keep it believeable ... long items need to lean to stand, small items sit atop larger items. Keep sizes relative.

It may take a few attempts ... here’s my second try!
(You didn’t really think he wouldn’t just eat the pizza, did you?)

So where's our pup going to stash his loot? In his dog house of course! But how much loot can you stuff into one medium-size dog house? Not as much as he can steal! So what happens when he's got too much stuff for his space?

A Grand Attempt to Stash the Loot

Draw out a dog house an appropriate size to fit the pile.

I use a light table, but tracing paper works great, too ... place the house over the pile of stuff. Try to balance it so that it looks precarious, but still looks like it would work in real life.

Now clean up those pencil lines! I like to trace everything on new paper with a black pen to get a clean drawing.

Our presumptuous, greedy little canine thinks the whole world belongs to him! Let's give him a name that reflects his mindset ...

When trying to draw letters freehand in a given space, just divide the space and the word into 4 equal spaces. It will make it easier to get it more evenly spaced.

Oops! When I try to put the name over the door, there’s too much stuff in the way.

So I shifted the flower pot a bit ... still can’t read the name very well.

Let’s just take the name straight across ... problem solved! The trick is not to never make a mistake ... it’s knowing what to do when mistakes happen.

And what should Napoleon look like? A short, stocky guy with attitude! And the neighbors are really complaining, so Napoleon needs some restraint. Will a short rope be enough to keep him in check? We hope so!

He’s got to be really pulling and tugging at that rope! Begin capturing that tension right from the start.

Still trying to capture the tension ... I raised his shoulder to get more angle on his body, and kept his head in the same position.

Starting to take shape ... ears need to be more forward ... not enough tension on the collar ... the right hind leg doesn’t look natural ...

Better! Let’s get him cleaned up!

Because, even though Napoleon has got it all, he wants MORE! There's always that one more thing that he has GOT TO HAVE ... the ONE THING that SOMEBODY ELSE HAS that HE DOESN'T! ... AAAARRRGGGHHH!!!!

Chloe as the Straight Guy

Of course every good gag needs the straight guy to play to ... we'll let Chloe fill that role for us. Even though Napoleon has got it all, he can see she's got the one thing he doesn't ... and he wants it!

The real-life Chloe was pretty laid-back and calm, but she was stingy, too. Even if Napoleon breaks free, he’s not getting her bone!

I wasn’t too happy with her expression, so I played around with that. Tracing paper or a light table can be invaluable for experimenting. Keep trying until you get just what you want.

Contrast is an artist’s or writer’s greatest secret weapon. Napoleon’s coming undone, so let’s make Chloe totally unruffled. In the final layout, we’ll place her just inches beyond his reach to really frustrate him.

Putting It All Together

Let’s size and arrange all our sketches, add our quote and a nice box to pull it all together. Now we have a nice arrangement, all ready for rendering. It would make a nice wall hanging ... or perhaps even a terrific t-shirt design.

But instead of a wall or a t-shirt, let’s put it on the WORLD WIDE WEB! And instead of just a graphic in an article, I want to use it on my Homepage.

First, let’s separate our 4 elements. Keep the same relative proportions as the layout above. Because the final renderings will be scanned into the computer and end up as raster images, we don't want extreme differences in sizes. If we need to tweak the size on one of the elements and tweak it too much, we could get pixelation, and we want all 4 elements to look as similar as possible. If unsure, making them larger than you need and reducing the size is better than increasing the size.

Trace or transfer all 4 onto a sheet of smooth Bristol board. Now let's do some rendering and add some color ... our line drawings come to life!

I scanned all the steps of the color rendering as I made it, and you can see the entire process in It LIVES! in the Freebies section.

I'll scan these into the computer and delete the white background. Each one will sit on its own layer in Photoshop ...

Now add some type and, voila! Another great Homepage for the website!

Art elements for my Homepage page need to be able to slide around and shift to accomodate the different sizes of screens on phones, computers and laptops. My wonderful web people know how to make that happen. Compare the Homepage of this site on a couple of different size screens, like a phone and a desktop computer, and you'll see what I mean ... 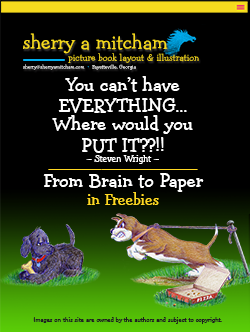 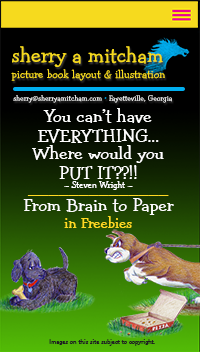 So this is what's really happening in the studio every day. Don't be alarmed when those voices in your head start whispering secrets and showing you movies. Whether or not you laugh along or talk back, pay attention! Maybe write it down. Then sit down at your drawing board, easel or keyboard and make something terrific to share with the world!

And, you know, this little experiment turned out okay ... perhaps I should write an article about it ...