The Grand Illusion - Part 2
Do You See What I See? 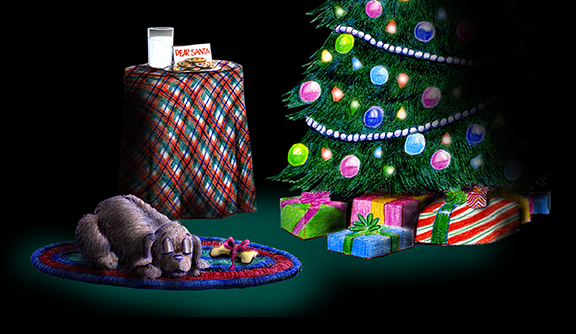 Ah, Christmas! Nothing quite so heart warming as tiptoeing down the stairs to sneak a peek at this peaceful scene ... your sweet puppy asleep, waiting for Santa to show up ...

... unless you have eye damage.

This is closer to what an eye-damaged person might see: 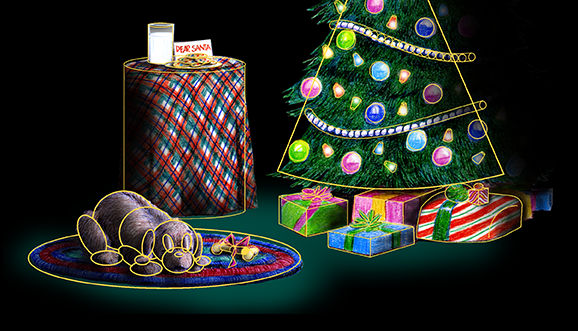 Because sometimes the simplest secret can rock your world.

And eye-damaged people know the secret.

In Part 1 I told you about Mr. Walter Lantz, the creator of Woody Woodpecker, who had shared a special secret with me ... the secret that was the beginning of my eye damage ... the secret of the circles and ovals that are the foundation of many animated cartoon characters. The circles and ovals I see every time I watch cartoons. Like watching a magician do his tricks, but I can actually see through the illusion.

He graced the desktop version of my Homepage for Part 1. I'm drawing him here in various positions to show you how a few simple round shapes can make the perfect foundation for a cartoon character.

I was just a kid learning to draw, but I immediately saw the appeal that animation had on all those early cartoonists. And the value of those basic round shapes. When those basic shapes are correct in relation and proportion to each other, the character can be drawn over and over with subtle changes, photographed into frames, captured onto film ... run the film and you've created movement! 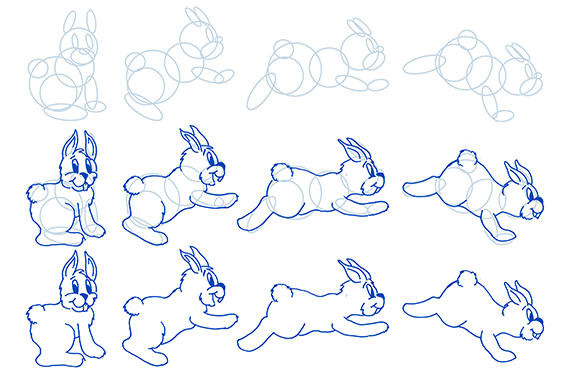 I know that today everything is done with computers, and I will absolutely admit to loving CGI versions of monsters over the old days when we had to settle for men in rubber suits. But go watch some early versions of animation and cartoons and just consider the love and labor it took to create those gems. Especially cartoons from the 1940's through the early 60's. By the late 60's it was getting too expensive to produce labor-intensive animation and studios had to find ways to cut corners and churn out more economical productions. Backgrounds were less detailed and they reduced the number of frames per action sequence, resulting in more jerky, less fluid movement of the characters. If you're able to see older cartoons, watch and compare them to cartoons from the 70's and later, pre-computer days. You will see the noticeable drop in quality.

The reason I picked up on it was because I was watching so closely ... the first symptom of damaged eyes. Observing every little nuance and detail. And I was really disappointed when the quality dropped ... my first lesson in how economic considerations affect art!

But I never again "just watched" a cartoon.

I was in my early years of grammar school when Mr. Lantz was sharing his wonderful secret with me. I remember so clearly sitting in front of the TV and drawing with him. Memories of drawing after that get a little fuzzy ...

At different times during my growing-up years, I got art kits, books, supplies. I don't remember any classes or formal training until a very disappointing high school art class my senior year. So I suspect it was a library book, or maybe a book from an art kit, or maybe even one of those Walter Foster books ... but at some point I learned a new secret ...

Anything in the world can be drawn by breaking it down into 4 basic shapes. Shapes that are actually 3-D versions of flat squares and rectangles, circles and ovals, and triangles. They are: 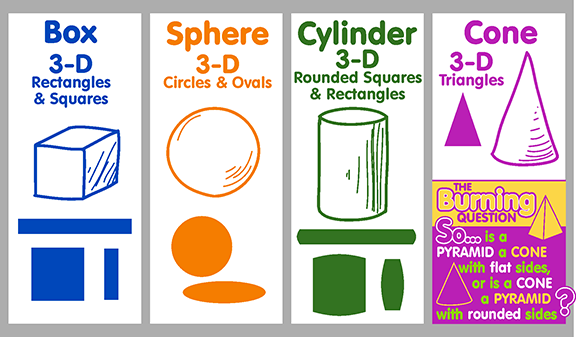 Anything? And with just 4 shapes? Oh, really? We'll have to investigate THAT for ourselves ...

Now this is the point where I'm supposed to take you into my world as a kid and show you what I observed to verify this new information. Unfortunately, now I'm ... well ... OLD!! So I don't have any pictures to show you from when I wasn't old and when I was learning this new secret. No cell phone armed with a camera in my pocket back in those olden, primitive days ... how did we ever function or survive?!

So, let's look at these basic shapes by looking at some items in my studio today ... 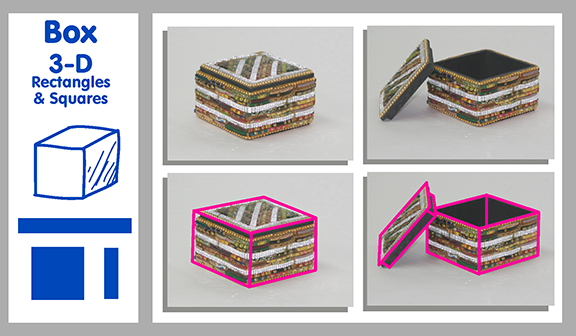 • BOXES - this pretty little box was a gift from a friend. It sits on my desk beside my computer. Jewelry like rings and watches go inside at the end of the day so that the next morning I'm not roaming the house and wondering where was I when I took them off the night before! And if you remove the lid ... now you have 2 boxes! 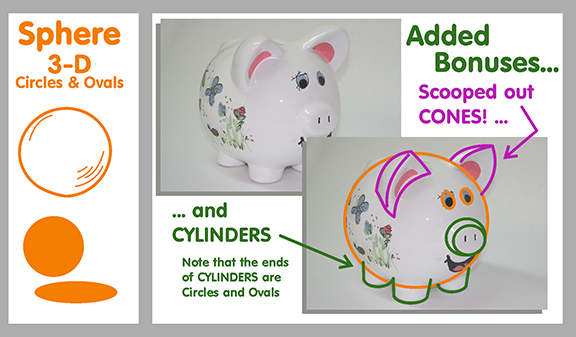 • SPHERES - Spheres can be tricky. Unless you're drawing an actual spherical object ... a beach ball, the EARTH (never pass up a good opportunity to get in a dig at the flat-earthers!) ... you will usually find spheres hiding in objects that bulge, like this piggy bank. And usually not perfectly round, but stretched a bit and more egg-shaped. 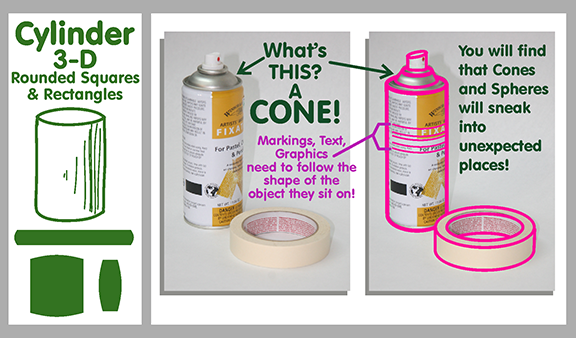 • CYLINDERS - For some reason, when I think of cylinders, I always think of soup cans! Cylinders can be long and tall, or short and squatty. In case you're curious, fixative is a coating you can spray on mediums like pencil or pastels to prevent smudging. My colored pencils are wax-based, so they don't smear. But when colored pencil is applied in heavy layers, over time you can get something called "wax bloom" where the wax travels to the top surface and makes the art look milky and dull. Fixative sprayed on final drawings will stop and prevent that.
And a money-saving trick ... I used to purchase expensive artist's tape, but I discovered that the painter's tape sold in hardware stores works just as well for a lower price. It's low-tack and won't tear your paper when you need to remove it. So much better than the masking tape we used back in the day! 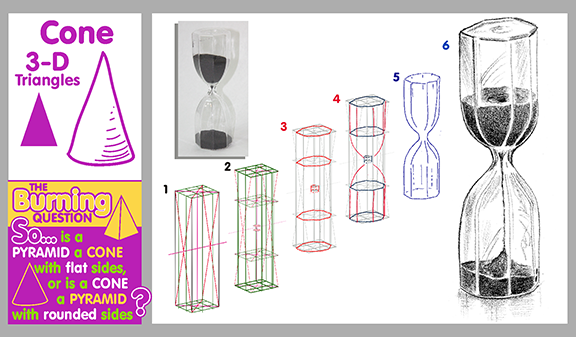 • CONES, PYRAMIDS and ... BOXES?! Yep! Bet you thought that would be a cylinder. But note the shape is actually an octagon. Actually, either could be used. So if you begin with a box, four sides are automatically taken care of. Then it's a cinch to figure out the angles on the other four sides. If you begin with a cylinder, box in the top and bottom ovals to do the same thing.
And, yeah, I suppose that an hourglass doesn't exactly seem like something that ought to be in an artist's studio. But an artist's studio needs to have things the artist loves ... and I love hourglasses! Inspiration, you know! I find it a bit hypnotic watching the sand flow. But this little glass was misnamed ... this one is a half hour glass!
And so stinkin' proud of myself ... used that poor black pencil!

It's Everywhere, it's EVERYWHERE!! 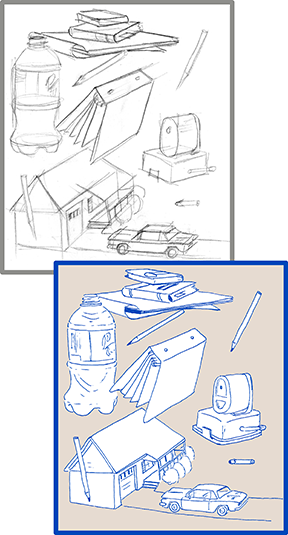 As I look around my studio, just like when I was a kid in my room, I can see these shapes everywhere. Mostly I see boxes, in the forms of books, my desk, drawing pads, the cabinet where my pencils are stored. The pencils themselves are long slender cylinders. Except for older, more used-up pencils ... those are short stubby cylinders! Cones and spheres are scarcer ... knobs on drawers, buttons on my camera or the CD player, the taper of a sharpened pencil, the taper of the bottle's neck on my soft drink, or the glass globes on a light fixture.

Instead of just seeing the shapes of cartoons on TV, now my whole world was filled up with shapes! Everywhere I looked and everything I looked at ... I didn't see a notebook, I saw a box, with a short side and a taller side, and rings on the inside, circular cylinders!

Outside sat our car: a smaller box sitting atop a larger box rolling around on short, thick cylinders! And it sat in the driveway in front of our house, which was another box with a 3-sided box on top, forming a triangle sitting on top of a square when viewed from the end ... and a row of spherical bushes sitting in front ... GOOD GRIEF!

Now the eye damage was complete! No cure. It's permanent. I've had it since those early drawing lessons. I'll have it my whole life. If my eyes are open and looking at something, it's already drawn in my head. If I'm looking at something that's intricate or busy with lots of parts or a complicated pattern ... I'll be breaking it down into simple components and organizing the mess in my head. Far from being a handicap ... it's exactly the right skill that's incredibly useful to an illustrator.

So fast forward through lots of years of growing up and living ... here I am today doing my thing, living in Fayette County, Georgia.