The Grand Illusion - Part 1
I See It, but I Don’t Believe It
or
What The Heck Am I Actually Looking At?!

We can’t say we weren’t warned. “Television will rot your brain!” we were told. We’d come home after school and, instead of going outside and playing, we’d plop down in front of the TV ... getting spoon-fed mindless nonsense and drivel disguised as entertainment while they tried to sell us cereal and toys, and blared out blatant messages: “Kids! Tell your parents ... !”

Now I was smarter than the average kid. I knew that, because I had friends who would actually go and deliver those messages from the TV announcers to their parents. I knew better. The consequences of those delivered messages were usually ... well ... not favorable, let’s say. I knew not to do that.

Because I was so smart I wasn’t the least bit concerned about my brain rotting. No brain damage in this head! I could watch cartoons all afternoon with no worries, because I saw through all the tricks and shenanigans of those TV people. I wouldn’t – I couldn’t – be tricked! No, sir! Because I was a SMART KID!

I know my brain was protected, because all these decades later, I can drive a stick shift! And I can calculate a restaurant tip, on the fly, in my head! I can solve hard sudoku puzzles ... in INK! No brain-damaged person can do things like that!

But I didn’t know to protect my eyes.

I’ll bet there were probably some special glasses in one of those cereal box give-a-ways, but I didn’t know to look for them. So I ended up with eye damage ... when I look at the world, I can see things that aren’t there.

It seems that no matter how smart you are, there will always be be somebody popping up eventually who will be just a bit smarter than you. If, in addition to being smart, they are sneaky as well ... they are probably working in children’s television. And, if, in addition to being smart and sneaky and working in children’s television, they can pull off being charming and engaging to a seven year old ... well ... just like the mermaids in the old fables that charmed sailors and lured ships into danger ... I got charmed and lured into the void and ended up with damaged eyes.

And I can tell you exactly which smart, sneaky, charming TV personality did the damage ...

It happened gradually, in tiny increments, day by day, every weekday afternoon. His name was Walter Lantz. His show was The Woody Woodpecker Show. For a kid with a pony, a brilliant blue cartoon character with a red top knot, a goofy laugh and an attitude would have been stimulation enough. Mr. Lantz took it a step farther. In between cartoons and cereal commercials, he demonstrated how to draw Woody ... and invited us to draw along with him ... and I obliged.

Mr. Lantz was a charmer ... even more than my first crush in second grade, Chesley Harris. Chesley broke my heart. I eventually got over him. But Mr. Lantz’s influence still haunts me to this day. My destiny was sealed. My vision forever altered. Should’ve looked for those glasses ... maybe ...

Then use those circles and ovals to guide drawing the actual character ... 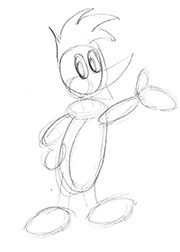 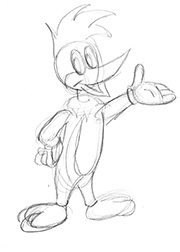 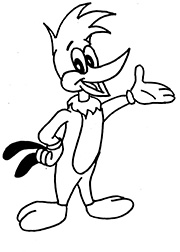 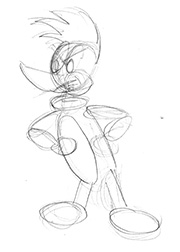 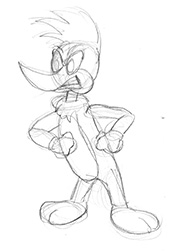 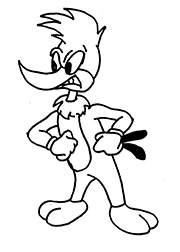 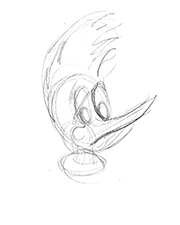 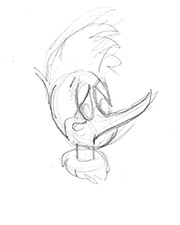 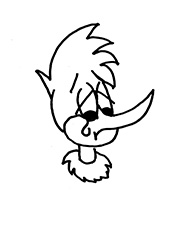 This was FUN! This was EASY!! And I was HOOKED!

Weekday afternoons with Woody and Mr. Lantz were fun ... get the pencil and paper ... we’re going to draw!

Saturday mornings were fun, too ... Looney Tunes! At first it didn’t occur to me to bring along my drawing supplies on Saturdays. There wasn’t anyone giving drawing lessons on Saturday mornings. Just lots of entertainment with the likes of the Road Runner and Porky Pig.

But I started noticing things – the first symptom of damaged eyes. For instance, I noticed that all these characters had oval eyes similar to Woody. I began to pay closer attention and started seeing past the actual images of the characters ... I could visualize the ovals and circles ... the foundation shapes of the characters. How about that *Bugs Bunny ... I’ll bet his white belly could be drawn with an oval ... let’s go get some paper and try! 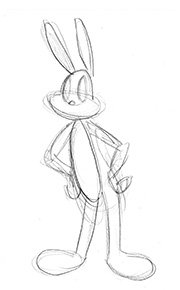 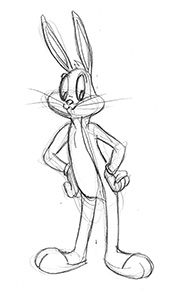 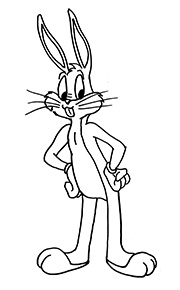 And sure enough ... voila! I could draw Bugs Bunny!

Oh, fun! I had to try out all my favorites ... starting with: 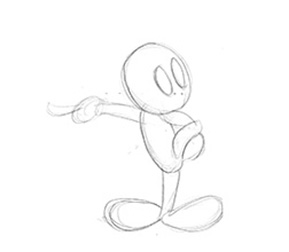 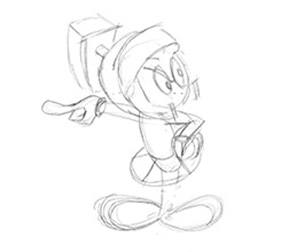 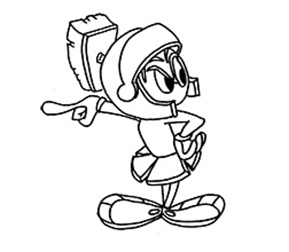 Marvin will always be my number one favorite alien with an attitude! Bugs Bunny was forever trying to foil Marvin’s plan to blast the earth with his Illudium Q-36 Explosive Space Modulator, because it was blocking his view of Venus. I wonder if that's where Douglas Adams got his inspiration for the Vogons and their plans for a hyperspacial express route through our solar system ... hmmm ... Anyway, like I mentioned in a blog, perhaps we should be trying to avoid the aliens instead of trying to meet them. Even though Marvin is adorable, he is perhaps a bit dangerous. Meeting up with him might not go so well for us! 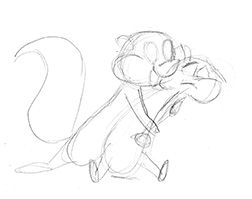 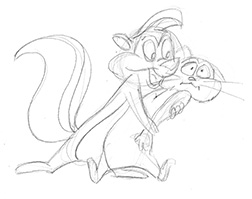 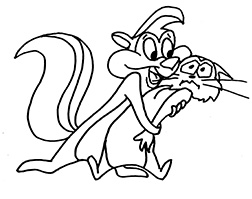 Pepé was the Don Juan of the cartoon universe. The romantics of the world add so much to our lives! But all that romance in their hearts can override their brains. Pepé couldn’t tell the difference between a lady skunk and a painted cat! If you have a romantic in your life, keep a watchful eye on them ... they may need some guidance! 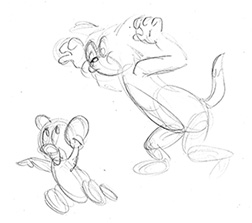 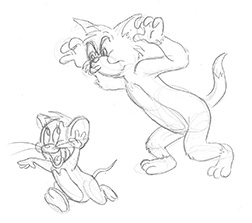 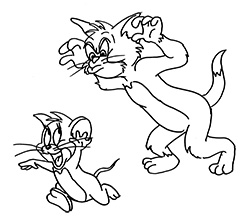 These two characters were the pantomime artists of the cartoon universe. With just a few exceptions in later cartoons, there was no dialogue. Just lots of action, music and sound effects to carry the story along. But these guys were EXPRESSIVE! Great for learning and practice-drawing facial expressions. A few simple, well-drawn lines can tell so much more than many paragraphs of narrative or dialogue!

So this is how it began ... every weekday afternoon and on Saturday mornings. More than watching, I was observing and studying ... lines, movements, color ... the first early steps in learning how to communicate visually.

My eyes slowly began to serve me in new, strange ways. And Walter Benjamin Lantz was the instigator of it all ... forever I will love that man!

Meanwhile, I’d invite you to get a pencil and paper and try some of these yourself. Just some simple ovals and shapes, placed and sized correctly. Then use those base shapes as a guide to draw final lines. Drawing begins in your eyes. Don’t focus so much on controlling your hand. Focus mostly on learning how to look and see. Copy these, then pick out some of your own favorite cartoons and try to break them down to their simple shapes. Try making up your own characters. I bet you’ll surprise yourself! And you thought you couldn’t draw!

But be careful! You could get eye damage, too!

As for me, my eye disease continued to progress ... click here for Part 2

For anyone interested in learning more about Mr. Lantz, here’s a link to a site with a short bio and a video of him receiving an honorary award at the 1979 Oscars.

*NOTE: All of these characters are licensed! Bugs Bunny, Marvin the Martian, Pepé Le Pew and Tom & Jerry are all owned by Warner Bros., Warner Media, and Turner Entertainment. I couldn't find a name of the license holder of Woody Woodpecker, but I doubt that he's in the public domain. DO NOT create art using these characters for public display or merchandise that will be marketed privately or publicly.

But absolutely DO have fun drawing these in the privacy of your home while learning to draw cartoon characters! Ask any accomplished painter if they have ever copied an old master. It's a great way to learn your craft: copying and learning from other artists who have mastered the skills you want to learn. Then practice, practice, practice!

If the steps I've shown here aren't detailed enough, just Google "How To Draw (___)" and name the character. There are many sites on the internet with terrific tutorials and videos. Most of all, have FUN!